AI (I want for) Christmas is…. A robot that can walk and talk. 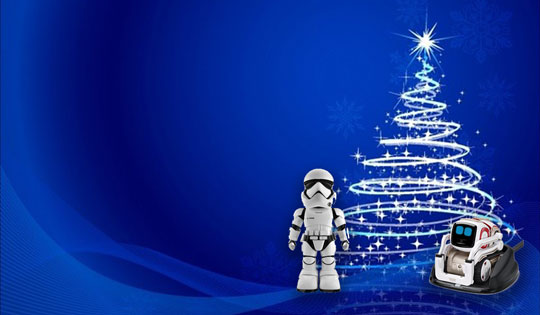 Be it Blade Runner, Westworld or The Terminator, sci-fi has been fascinated with the artificially intelligent robot for a long time. Now, robotics and AI have made such leaps and bounds in their sophistication technology wise, that now it is an actual reality for us to use AI robot products in mainstream culture. When once upon a time, children played with wooden dolls and toy cars, now children have access to lots more kinds of toys, including those that utilise Artificial Intelligence. Toys are now using the AI features such as speech recognition and name learning. Even old-school toy classics such as Barbie’s have received an upgrade.

One example of an AI product marketed for children is the Cozmo robot by the company Anki. The product description for this product on most retailer’s websites claims that Cozmo “grows and develops his personality as you spend time together” and who likes to “learn”. Cozmo has “emotions” and a “big personality”, essentially, it’s a robot programmed to play games and talk to children. The robot works by receiving information from a device (that must be compatible with IoS and Android), on the Cozmo app. Whilst the app may be free, Cozmo retails for £169.99 in places such as John Lewis and Argos (https://developer.anki.com). But it isn’t only toys specifically designed and promoted as an AI toy, many just use certain features and elements of artificial intelligence. For example some may only have the options of voice recognition, such as multiple dog robots that can flip, sit, or speak on command, such as the Lucy Sing / Dance dog, and the Teksta dog, having had first hand experience with these types of voice recognition toys, it is clear that extensive repetition is the key….. much to the irritation of anyone else in the house

According to Arend Hintze (Michigan State University assistant professor), there are 4 types of AI. The first of these is ‘reactive machines’, which possess no memory and cannot use past experiences to inform future decisions. It analyses all possible options in the moment. This kind of AI is like a machine (or app!) that you can play chess against, choosing the most strategic move for the moment but can look no further forward or backwards. However, the most frequent kind of AI we are seeing aimed at the child market (and in general to the mainstream consumer) is Hintze’s second kind; called ‘limited memory’. This kind can utilise past experiences to make new decisions. The 3rd and 4th types of AI are currently being developed and will aim to create AI that can understand the complexity of human beliefs, emotion and gaining a sense of self-consciousness.

In a burgeoning consumer culture, it is no surprise that AI has found its way to the retailers or children’s markets. We’re so used to it now, that it’s almost normal to tell a toy dog to sit and for it to do it. In particular with Christmas approaching, the call for technological toys is even higher than normal. With another example of an AI robot being the Storm Trooper whose feature include “voice command, facial recognition, sentry patrolling, AR gamification, App control, Programmable and Wi-Fi connectivity” (https://www.ubtrobot.com/us/)

I would love one of these for Christmas, but the Storm Trooper retails at around £300, so I think I will be putting it on my list to send to Father Christmas. Will there be an AI Tech on your Christmas list this year?